NOTE - We don't do small quantities of household scrap like washing machines! Sorry!

Copper metal is one of the oldest metal components used in the world, predating back to Egyptian and Roman empires and even Biblical times. It is a ductile metal with a very high thermal and electrical conductive capacity. Unlike majority of its counterparts in the conductivity space it is also highly malleable. It can be forged into just about any form, from metallic rods to strings and rings. 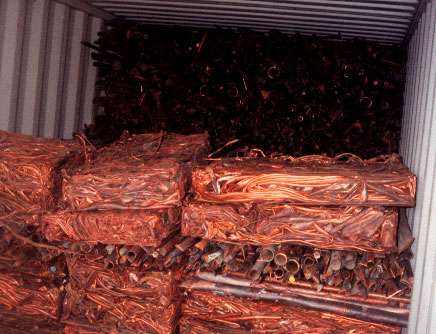 That being said, the copper reserves in the world seem to be quickly receding. This is true despite the fact that only about 12 percent of the metal has been mined to date. Because of this reason the price of copper has continued to rise, buoyed by growing demand and increasing production costs. It has become a booming business, its growth is dangerously unsustainable and our reserves and the environment are bearing the brunt of it all.

Majority of the copper supplied in the world goes into electrical installations, for electrical equipment and accessories. These items have to be in the purest form. This is a requirement if we want materials to be able to withstand large voltages and high conductivity standards.  This kind of quality can only be produced from virgin copper unless you refine used copper through electrolysis. To prevent expensive financial failures that result from hot shorting this quality has to be maintainedat very high standards. This standard can only be achieved from pure virgin copper.

Recycled copper has numerous non-electrical uses too. Majority of it used in the production of volumes of plumbing material, heat exchange units and even roofing materials such as roofing sheets and gutters. Such materials do not require high quality copper standards such as conductivity. Regular scrap copper can be used to produce such materials within provided quality standards.

There are so many reasons that make recycling of copper very desirable. The following are some of the major reasons why copper recycling is finding favor in the metal industry.

When you come across a sign saying “Scrap Metal” you automatically think of an site where discarded and twisted metal that are hardly worth anything are dumped and forgotten about. It could not be farther from the truth. A scrap metal works is where untold riches are reborn and recreated by recycling into many types of metal products that eventually find their way back into the production chain. A very valuable metal At Scrap Metal Sydney, we not only collect scrap metals from around the Sydney area, we also  recycle the non-ferrous metal copper which is one of the most valuable metals that can be recycled back into the manufacturing chain. The recycling of copper and copper alloys started in the old world, continued through the Middle Ages when bronze cannons were melted down to make more useful items. During times of war, bells were used to make canons. Today, the use of copper has changed and we find it recycled and used for peaceful purposes. Perfect for electricity Because of its very high conductivity properties, we recycle copper for use in the manufacture of fine electricity wires and large electricity cables. We pay top dollar for collecting and recycling copper scrap material but we are compensated by the high value of the recycled copper we sell to manufactures.  Due to the high demand for top quality recycled copper, we strive to produce the best copper alloy for the production of electrical products, mainly electrical wires and cables. Perfect high […]